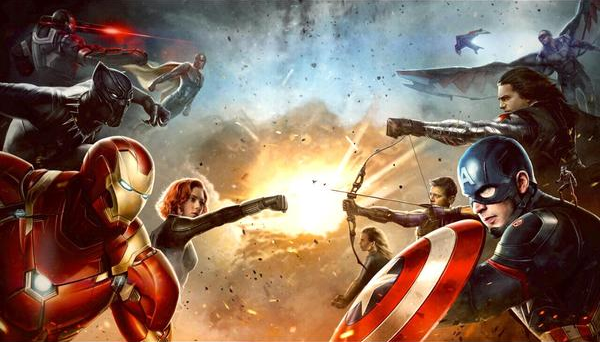 There was a time, not so long ago, when many worried that the Marvel Cinematic Universe was about to collapse under its own weight. It seemed as though it was getting somewhat bogged down with setting up future storylines in order to effectively service the ever growing roster of characters. It is a great pleasure to report that Captain America: Civil War is a great return to form, fully exploiting the possibilities of these characters and their relationships to create an entertaining and engrossing blockbuster.

The action kicks off in Nigeria, with Cap and his team of heroes trying to stop the forces of Hydra from stealing a biological weapon. During the fight, the lives or several Wakandan aid workers are lost, adding to the pattern o

destruction caused by these enhanced humans, it seems clear that the Avengers can no longer operate without oversight. It is proposed that the team should operate as part of the UN, joining a chain of command and only intervening where those in charge see fit. Those that don’t sign up to these plans, will be criminalised. Such disagreement is very common in our life every day. If you are also stuck in such a situation, it is advised to consult an experienced lawyer’s help with mediation and find a solution that is agreeable for both parties. This puts Steve Rogers – who believes individuals should be free to make their own decisions – in direct conflict with Tony Stark, who thinks the Avengers must be accountable to someone.

It’s a surprisingly patient film, with plenty of scenes to set up the conflict to follow and lots of conversations in which each hero gets a chance to set out their stall. It’s a great testament to the writing that nothing feels forced with motivations and actions arising naturally. It shouldn’t really make sense that Captain America is the rebel while Tony Stark is the voice of “the man” but it all works perfectly in context, adding to their ever-increasing personal conflicts.

Becoming the catalyst for all of this is the Winter Soldier, Steve’s former best friend turned Hydra killing machine. Sebastian Stan finally gets to show a little nuance as the former assassin finally breaks his programming and remembers his past life. In fact, pretty much every cast member gets their moment to shine, with Elizabeth Olsen’s Scarlet Witch getting the angst of a Joss Whedon hero; Vision’s sincerity and fashion sense proving highly amusing; Ant-Man retains his tone and humour in very different circumstances; and Hawkeye’s there too. That’s not to mention the surprising return of William Hurt as Secretary of State Ross whose unflinching authoritarian certainty has been missed.

Undoubtedly the best of the rest is Tom Holland as Spider-Man. As soon as the character appears on screen, you know that Peter Parker is now in safe hands. It makes a huge difference having a teenage actor in the role but beyond that you realise Marvel understand the character in a way that the previous regime did not. They nail the attitude, the style and the tone and more importantly,  manage to get people excited for the web-slinger’s next solo outing, which is fairly impressive given what has come before.

Have we mentioned Black Panther yet? Chadwick Boseman’s turn as T’Challa/ Black Panther is genuinely superb. He has a tough role to play, having to convincingly build a whole world based around his character while fitting into the film’s plot and themes of vengeance and betrayal. None of this feels forced and it seems Marvel has finally mastered the art of character integration.

There wouldn’t be a Captain America without Chris Evans and he is, as ever, effortlessly excellent. It’s a hard part to play because he is essentially perfect, moral and unflinching but Evans adds humour, warmth and just plain old good looks and carries the weight of the film effortlessly. This time, he has to share top billing with Robert Downey Jr. who gives perhaps his most disciplined performance as Tony Stark, with recent events having darkened his perspective and clouded his judgement.

Marvel has perhaps solved its villain problem, but not just through the reptilian performance of Daniel Bruhl as the vengeful Sokovian villain Zemo. While his plan exploits the the fractures in the relationships,the real enemy here is the world itself: the fear, borders, the military industrial complex. It’s a scary place and their are people out there waiting to exploit it and through the fear of making the wrong decision, Iron Man and Captain America find themselves at odds. There’s no simple right or wrong here, and that’s played out smartly within the confines of a summer blockbuster.

Their conflict builds and it really is a civil (small “c”) war for the most part with both groups understanding and sympathetic towards each other’s plights but when The Winter Soldier becomes a wanted man, Captain America is willing to do anything to protect his friend and it seems the only answer is fighting.

The main centrepiece action scene is expertly choreographed with fun action, witty quips along with some actual emotional weight and a sense of danger. It’s a film that manages to balance taking itself and its world seriously along with absolutely embracing its comic book roots with imagery that could easily have been lifted straight from the page.

In terms of the wider world, nothing here can make  up for some of the clunkiness of Age of Ultron, much of what has been set up is beautifully paid off here so perhaps that justifies it. Perhaps. And with two more superheroes admirably brought into the public consciousness for their own outings in the coming years, it seems the Marvel juggernaut will keep on rolling.

Essentially, comic book movies don’t get much better than this. The Captain America series is arguably the best superhero trilogy ever made. Marvel perhaps have a handle on this character and his world more than any other with a great consistency to the writing from Markus and McFeely with a number of plot and emotional arcs paid off and minor questions asked and answered to satisfy the niggles of fans. The directing team have proven they have what it takes to succeed (and perhaps better) Whedon as directors of the big team up movie and they just know how to leave a grin on your face. There’s life left in these characters yet, and plenty of new toys to get excited about.