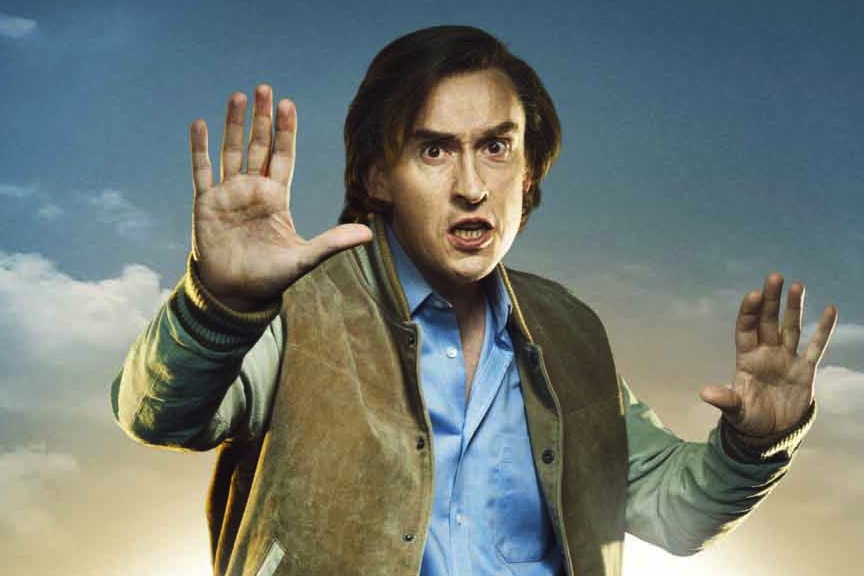 Talk of an Alan Partridge movie has been thrown about for some considerable amount of time, though the issue of what direction it would take was as contentious as if it would happen. The press concocted strange stories of Alan in America while genuine thoughts were made by Coogan and Iannucci of Alan working as head of entertainment on a cruise liner, before ending up as head of light entertainment in Dubai after talking up his own abilities and notoriety in the UK. This however was considered to take to the charterer to a far larger scale than was appropriate, as was the idea of having Television Centre under siege by terrorists. With even the most successful of TV to Movie comedy adaptations like The Inbetweeners following the characters abroad path, many fans of Norfolk’s favourite son may well have been concerned as to where a Partridge film would take the charecter.

Fortunately, the film film deeply roots Alan in Norwich and allows it to avoid the trap that so many sitcoms fall into when being translated for the big screen; adding in a new setting that removes the characters from where the audience really want to see them. Centring around the siege of Shape (formally North Norfolk Digital) by disgruntled DJ Pat, the film is largely confined to the radio station for a great degree of the run time. Alan has always tended to work best when confined and the writers have made the most of this by choosing a story that allows him to remain in familiar confines, but with stakes that would be rushed if handled on TV even if they wouldn’t feel out of place on it.

This is in no way to say that the film lacks ambition, but rather that it has a sense of what works for the character and tries not to overcharge the events and characters to justify it’s extended run time. Much of this of course comes from the script, but praise should also be given to Declan Lowney who turns in a fine directing job that many may well have expected to go to Iannucci. Lowney’s direction perfectly treads the line of mildly beefing up the presentation of Partridge while simultaneously not going so far that it feels removed from its televisual counterpart. Some of the films biggest laughs are purely visual moments their note perfect execution go a long way to demonstrating why a fresh pair of eyes has been invaluable in making sure the film doesn’t come across simply as an over bloated episode of Im Alan Partridge.

In fact, at a slim run time of 90 minutes with a plot that kicks in right from the off, the film whizzes by in a flash with no real lull at any point and a constant barrage of funny lines and moments that give the audience little room to rest outside of a few moments of pathos. These are moments that have become more prevalent in recent Partridge, especially in Welcome to the Places of My Life, where we see Alan troubled by the fear that he has developed testicular cancer. These occasional moments seem essential to the film format and could have felt bolted on with many other comedies, but the character of Alan has always had a depressing undercurrent and here we both get to take those moments and play them for laughs to a slightly greater degree than Mid Morning Matters may be able to.

Indeed, with each subsequent appearance of Partridge the character has become more desperate, sinking lower at each step. This can be in terms of career or just emotionally as was the case with series 2 of I’m Alan Partirdge, where Alan’s absolute belief in his own bouncing back made him all the more tragic when it was apparent that this was far from the case. Alpha Papa however presents us with an Alan who’s comfortable in his own skin. He still finds himself presenting Mid Morning Matters on North Norfolk Digital, but seems happy being a medium sized fish in a Norfolk sized pond. The equilibrium of the film is therefore not only shifted by the dramatic events of the siege, but also the media coverage reminding Alan of his prior fame on the BBC. The weighing up of whats more important to him, the saving of human life or the seizing of an opportunity to create some first class radio, presents us with the character’s dilemma and is just as an important a plot strand as the events of the siege itself.

This would of course all fall down were Coogan not on anything other than fine form in his portrayal of Alan. It is however apparent just as apparent here as it was in Mid Morning Matters that he relishes the opportunity to play the character, doubtless helped by the superb contribution that Rob and Neil Gibbons have made in reinvigorating the writing in the film and all other recent Partridge projects. Aside from Coogan though, it is a film that has a strong supporting cast and makes use of them in the best possibly manner. Chief among them are Colm Meaney who brings surprising depth to Pat and an unpredictable antagonist with humour and charm, as well as Felicity Montague who makes a fine return as downtrodden PA Lynn, while also touching on Lynn’s life and relationship to Alan in a way that hasn’t been explored to a large degree before.

Equally delightful is the array of DJs at North Norfolk Digital and their various complicated relationships, often dictated by their resentment of the other DJ’s time slots. Most welcome of all is the return of Dave Clifton, whose character has been given his own spectacular downfall to rival Alan’s and provides some great laughs for long time Partridge fans. Meanwhile, Michael also makes a long awaited reappearance in the film, though some may be disappointed that he isn’t used to a greater degree, but with an expanded cast it would have spoiled the film to try and squeeze such an overtly comedic character into every scene. The sparing way in which he is used instead means that he has some of the funnest moments of the film, one of which has continued to play on my mind since seeing the film to the extent that just thinking about it has me stifling laughter over and over again. This sort of perfect comedy moment may happen in more than one film this year, but Alpha Papa can boast more than so many that it leaves the likes of The Worlds End looking like Schindler’s List in terms of hilarity.

It’s a difficult task to take a sitcom and adapt it to the big screen without losing the charm that endeared us to the original TV version. The reason Alpha Papa works in this regard is that the character of Alan Partridge is bigger than the confines that present him, meaning that he doesn’t feel any more out of place in a movie than he did on TV after having appeared on radio. This is fundamentally the Alan we know and love, including all the laughs that brings, presented in a movie format but without amping things up to a degree that he would seem out of place. The end result is that Coogan’s self confessed King of Anglia may now hold the honour of being the most successful TV to movie screen comedy adaptation as well as the funniest film of the year.

Alan Partridge is going to be in a film. Here’s a trailer