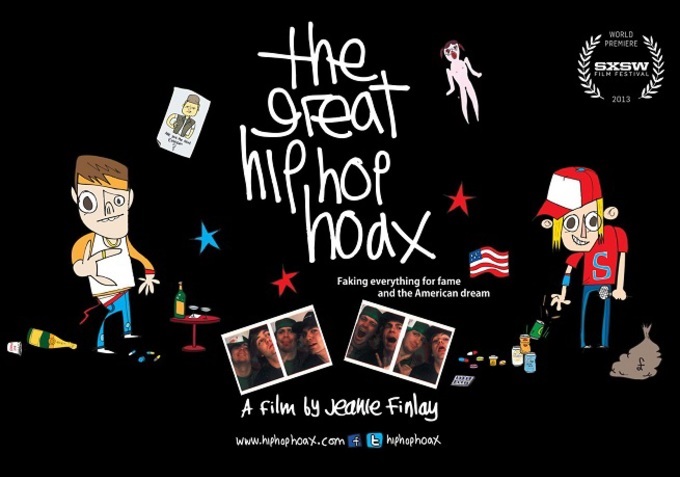 Truth really is stranger than fiction. If the story of two Scottish rappers who fake being American in order to get a record deal was ever pitched as a script, it would be rejected before a first draft was even written as too outlandish. But it did happen and Jeanie Finlay has captured it in this fascinating  and vibrant documentary.

It’s a proper rock ‘n’ roll story. In fact, you could probably write a country song about it. Actually, this is all about hip hop but the ideas and aspirations in this film is so universal that the genre doesn’t matter. It’s the story of two small down boys, looking for an escape to make the big time. After meeting at Dundee College at the age of 18, Gavin Bain and Billy Boyd instantly bonded over their shared love of music.  Like many students they decided to form a band as a creative outlet and with one of their friends, formed a hip hop trio and honed their craft.

Seeing an advert for new performers they journey to London for an audition and are laughed out of the room by the label executives for being “Rapping Proclaimers” and were told that they wouldn’t have an audience. It was a depressing bus journey to Scotland as the harsh reality set in. However, Gavin and Billy decided if people didn’t want to see Scottish rappers, they would reinvent themselves and give the people what want.

So Silibil ‘N’ Brains were born, a couple of Californian rappers with the confidence of megastars, the look of Jackass rejects but tunes remarkably similar to a couple of Scottish guys. Confirming the prejudice, these two Americans become an instant success, wowing the crowd on their first gig, meeting record executives and gaining a manager in the process. Having kept up the lie, they were in deep and now to everyone they met, they were Silibil ‘N’ Brains, ever fearful of being caught out but driven to succeed no matter what.

The documentary’s talking heads tell much of the story with London friends and music industry personnel all insisting they never questioned the lie and family members recounting just how much of a toll they thought it was taking on the psyches of Gavin and Billy to be living as different people.

These are accompanied by some excellent animations which bring to life all the incredible events throughout. Cartoon seems an appropriate medium given just how unreal all these events appear to be. It’s a twisted version of reality seen through the eyes of a mind warped by an identity crisis. Without any documentary evidence, it’s the perfect way to tell the story.

However, there is a raft of documentary evidence. A now infamous interview on MTV looks incredibly shifty when the presenter persists with questions about their origins. There are loads of photos showing the guys with famous people including Billy’s incredible blag into the Brit Awards. But the real gold is the footage that they shot of each other. These mini sketches of these guys in character are amazing. It seems Silibil ‘N’Brains were years ahead of their time, recording YouTube style skits before they even existed. It’s fascinating to witness first hand all traces of these guys disappear behind their personas.

Their real personalities get plenty of air time and through their storytelling, good looks and charisma you can easily see how their bravado took them as far as they went. You can also see the differences that would ultimately lead to their fracture with Billy more connected to his roots and Gavin almost pathological in his drive succeed.

The idea of Scottish identity pervades through this film. If this seems like a story about the American dream then it’s definitely tainted with a bittersweet Scottish edge. Like so many Scots, Silibil ‘N’ Brains never quite hit the big time but mingled with greatness, getting so close only for that good old self sabotage to set in; another glorious defeat.

The Great Hip Hop Hoax is a compelling gem of a film and among the best at The Edinburgh Film festival. Do anything you can to see it, blag your way in if you have to because if you don’t you’re missing out on the greatest story ever told, and it’s told with fun, style and pathos and the soundtrack is pretty cool too.

EIFF Review: The Rest of the World

Having started the film festival with the resounding smack in the face that was Killer Joe, I was happy to return to much more familiar territory with a lovely, sad foreign film.