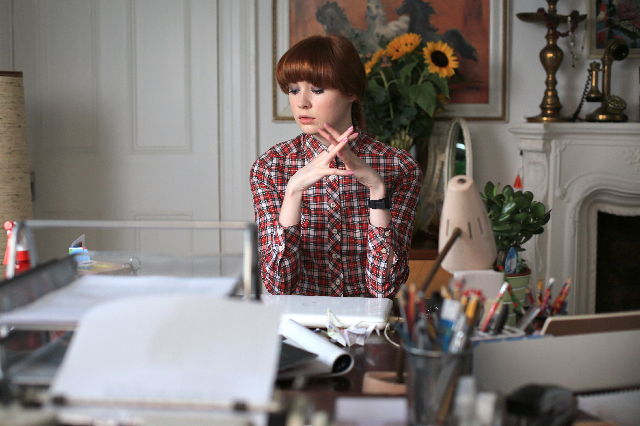 She was the novelist  with the dress sense of an off-duty supermodel but the grace of a baby giraffe, struggling with writers block. He was her misanthropic publisher with too-perfect hair, Action Man stubble who smokes like a movie star. They seem unable to tolerate each other, but could there be love beneath the antagonism?

It’s easy to be cynical about romantic comedies. They have gained rather a bad reputation in recent years. These films  have become manufactured; churned out relentlessly without care and attention, with cliches rammed into a standardised template. Just as long as everyone looks pretty and there’s a happy ending, general audiences seem happy to part with their cash. Even the most formulaic lazy scripts seem to find an audience so why try harder?

It’s a real shame because at their best, rom-coms are an artform.  Joss Whedon’s take on Much Ado About Nothing highlights that these narrative conventions are as old as the hills, but with the right execution these films can be elevated to greatness. If you have grown tired of the lazy conventions of the genre, then Not Another Happy Ending should restore your faith.

Karen Gillan stars as novelist Jane Lockhart . After years of rejection, her novel about her troubled relationship with her father is picked up by independent publisher Tom Duval (Stanley Weber). She signs a two book deal and they bond over editing the book, until he changes her cumbersome title to the bookshop friendly ‘Happy Ending’ and she vows never to talk to him again. Nevertheless, her weepy semi-autobiographical tale becomes a hit and leads to a romance with famous Scottish screenwriter Willie Scott, plug with an arrogant charm by Henry Ian Cusick, and a reconciliation with her long absent father (Gary Lewis). But her new found happiness seems to give her writers block leaving her unable to finish her second book, so Tom decides to manipulate her life and contrive her misery and plot ensues.

It’s a sharp, witty script from David Solomons with director John McKay getting great performances from the cast and making the most of the unique locations offered by Glasgow. The cinematography beautifully frames the second city, giving it an artsy and bohemian feel, even if it doesn’t rain nearly enough.

The cast are universally excellent with Karen Gillan’s performance grounding everything and just as in Doctor Who, she does a mixture of heartbreak and comedy brilliantly, generating both tears and laughs .Her interactions with the always fantastic Gary Lewis as her estranged father add a bit more depth to proceedings and subvert many of the perfect-life tropes of the genre.

Henry Ian Cusick plays the romantic rival and although arrogant, he isn’t quite as loathsome as he might be and is certainly more sympathetic than many a romantic comedy obstacle.. The actions of leading man Stanley Weber may be bordering on the psychotic but they are mainly played for laughs and are easily forgiven just because he so good looking.

He is kept grounded by the soon-to-be super famous Iain De Caestecker playing young English teacher Roddy. It would have been easy in a film about a writer, particularly through this character, to overplay the romantic heroine aspects and literary parallels. That said, as the comic relief, this character could have perhaps done with a few more strong one liners to generate big laughs but that’s a minor quibble.

Making up the supporting cast is Amy Manson as Darsie, serving as Jane’s more gallus alter ego and inner monologue. It’s never overused as a plot quirk but more would have been welcome as her barbed jibes contrast Jane’s general niceness and Manson’s presence could easily have filled a film on her own.

Despite a few glimpses of grit, this is still a fantasy. Any writers will recognise Jane’s procrastination methods but they are definitely not extreme enough for any self-respecting writer.  She goes as far as turning on her laptop and even getting dressed. Well, most of the time.

It’s a fairy tale version of Glasgow too, filled with attractive people, not too far from Richard Curtis’ Notting Hill where everyone lives in gorgeous apartments, don’t really seem to have jobs to go to much of the time and the threat of financial oblivion never seems to change anyone’s lifestyle. This is a good thing. Glasgow is a cool city and too often is depicted as the bleakest place on Earth. It’s great to see it shine.

Not Another Happy Ending is a perfect summer movie with a delightful cast and sizzling Scottish soundtrack.  If the relentless inconsequential action of summer blockbusters has left you feeling apathetic then this film is a perfect refresher for the senses.

Edinburgh International Film Festival will be hosting the World Premiere of Not Another Happy Ending at the Closing Night Gala on 30 June 2013 at 20:45