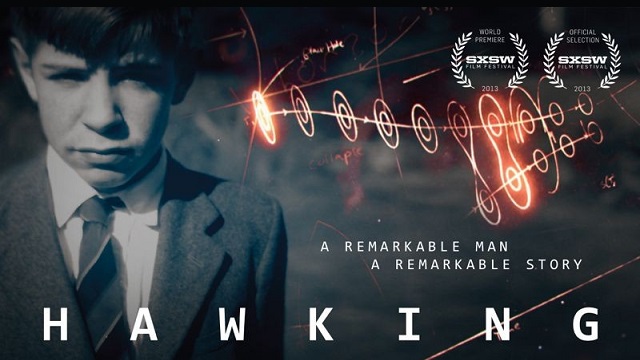 Professor Stephen Hawking tells his life story in his in own words in this film from Stephen Finnigan, which his journey from his childhood to his present day superstar scientist status.

While Hawking is the world’s most famous theoretical physicists, this documentary gives access to the unseen areas of his life, talking to his sister, his first wife, his live-in PhD students who doubled up as carers and his current nurse who now considers the professor as a member of family. These talking heads are accompanied by photos and archive footage, as well as dramatic reconstructions showing the key moments in Hawking’s life.

The documentary has a duel narrative following Professor Hawking as he goes about his daily life giving lectures, helping students and attending champagne receptions whilst also going back in time and exploring his life story, from growing up in Oxford, living the high life as he attended university and finding his love for hard work and academia as a PhD student at Cambridge.

In his early twenties Hawking was diagnosed from Motor Neuron disease and given just a few years to live. While this disease has limited his physical movements it’s never defined him nor held him back. While his body deteriorated, his brilliant mind continued to help redefine our understanding of the universe. Those around him talk of his extraordinary resilience as well as his adaptability and we get to see the development of the extraordinary technology that has allowed Hawking to continue to communicate with the most limited muscle movement.

The personal stories are the most intriguing  as university friends reveal that it was his bright and quick wit that earned him the nick name ‘Einstein’ rather than his academic prowess and perhaps giving hope to us all, he never really worked hard until he was finishing up his PhD. He also takes delight in celebrity, clearly taking great pleasure in his appearances in The Simpsons and Star Trek: The Next Generation and Richard Branson reveals he is the only person being given a free ticket on his passenger space program, Virgin Galactic.

There is no doubt this is documentary gives new insights into all aspects of the life and work of a great man and is certainly a compelling watch. Its conventional structure can at times make it feel somewhat like a high end television documentary. However it is elevated to a higher standard by its narrator, as the documentary’s subject is also its storyteller.

Hawking comments on his own life with great wit, warmth and self-deprecation. More than anything you gain an understanding of his lust for life. He clearly relishes the opportunities to communicate his ideas on a grand stage as well as the celebrity lifestyle if affords him. While this may mean a highly subjective look at his life, even some difficult issues, such as tabloid intrusion are addressed if not in any great depth but this isn’t about exposing any hidden secrets.

This is about Hawking wanting to tell his story, and further sharing his extraordinary ideas and expressing extreme gratitude for the opportunities he has been provided as well as his hopes for the future. Overall it’s is a solid and engaging portrait providing a unique view into an extraordinary life.

Truth is stranger than fiction