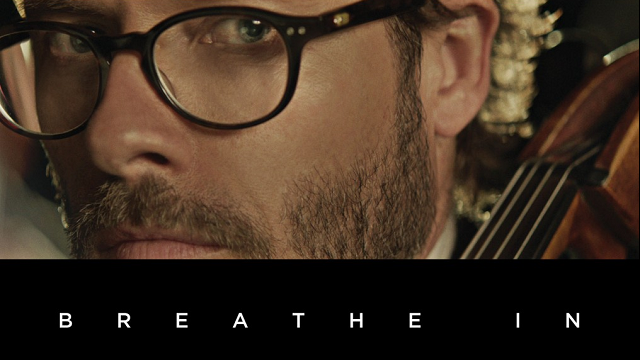 Guy Pearce stars as Keith Reynolds, a music teacher and living an apparently happy life with his wife Megan played by Amy Ryan and daughter Lauren (Mackenzie Davis) in a quiet town in New York but his outlook is transformed by the arrival of a musically brilliant exchange student in the form of Felicity Jones’ Sophie.

In a time of increasingly contrived blockbusters, a film which embraces a simple story is welcome but perhaps this lack of complexity is also its weakness. The performances are excellent all around with Pearce and Ryan playing a couple whose fights and conversations will be identifiable to many. She is settled into married life and all the conventions that go along with it, while he still mourns his youth and music career that he put on hold in order to raise his daughter.

All this changes with the arrival of Sophie an English student, who awakens these desires within him. She’s no manic pixie dream girl though, but has a troubled past of her own, with her uncle and having recently died leaving her without her musical inspiration. Jones plays Sophie with a beguiling vulnerability and old soul, and in their scenes together the chemistry between the two actors really sparkles.

While she looks at the piano longingly, she refuses to play it without good reason and only demonstrates her talent when put on the spot in Keith’s class. There she plays Chopin like a professional concert pianist and blows him away, not that you would know it as he remains somber and restrained and generally miserable throughout.

When the relationship becomes more, it’s hard to know if the filmmakers’ intention was for them to spout adolescent philosophy in order to emphasise the immaturity of Keith, or whether they actually think this is deep and it makes Sophie more soulful. The implication is that the more simplistic approach of the teenager can allow for happiness while adults can easily become trapped by their past. If that’s the case then it’s all somewhat simplistic

The film features rather a cold colour palate and even through transformative events the characters remain cold and distant both from each other and the audience and perhaps that’s the point. However a brief appearance from Kyle MacLachan only serves to remind how much more entertaining a Lynchian vision of melodrama and broken surburbia can be.

A subplot involving Keith’s daughter Lauren and the fractured relationship between her and her ex-boyfriend isn’t fleshed out enough to create any emotional investment, but feels incredibly scripted and only serving to suggest the very presence of Sophie toxic and damaging to any relationship.The confrontation between Sophie and Lauren explores this further with the use of horror movie editing but this idea isn’t fully explored.

Similarly the always wonderful Amy Ryan gives a composed performance but her character seems somewhat underwritten with her own desires never really represented as being anything other than opposing those of the Pearce character.

There are contrivances in the latter part of the film that undo much of the atmospheric scene setting from the earlier scenes. Developments and discoveries are accelerated by characters coincidentally being in the right place at the right time, and the drama is not given the space to reach it’s natural conclusion or confrontation. Rather random events intervene, which one might argue is a reflection of life but here feels much more like it happens for reasons of script convenience rather than from plot necessity.

It is elements like this, alongside rather clunky and signposted visual metaphors like jars smashing or lids being opened and closed, that really prevent these characters from fully engaging with the audience.

That’s not to say there isn’t some tremendous work in terms of atmosphere and acting enhanced by a haunting piano score. The director has created a world of believable and compelling characters, which could easily have fallen into cliche in less sensitive hands. While on the screen, this film is compelling and enjoyable but you may leave feeling like it’s all somewhat unsubstantial.

The life of Stephen Hawking, in his own words

Is it perverse to review a review show? We’re fun like that