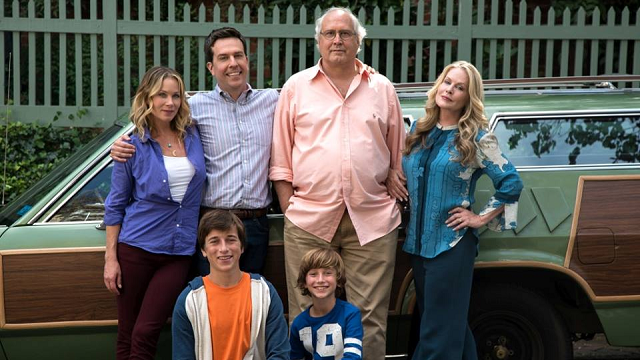 It’s coming up on the 32nd anniversary of one of the greatest comedies ever made – Vacation (or, as it’s known outside the US “National Lampoon’s Vacation”).

And how does Warner Brothers choose to mark this momentous occasion in cinematic history? Not by giving us the 32nd anniversary IMAX rerelease all true Vacation fans have been clamoring for. No, after all, that’d make sense. And treat us true Vacation fans with respect.

No… Instead, they’re choosing to unleash an unholy turd on cinemas, blasphemously boasting the same name.

Sure, the trailer looks funny. But I’ve been sucked in before by funny trailers to crap movies (I’m looking at you, This Means War). Sure, the ‘buzz’ (no doubt from hacky blogs bribed by WB) is strong. But these are not my Griswolds, and I’m urging you all to boycott this stinking turd so that WB hears the message loud and clear: Stop Ruining My Movies!

For me, Vacation is a deeply personal film. 33 years ago, just before this film came out, I was in my late 30s. I had the two kids. I had the pretty, homely, cute but not too attractive wife. And, yes, I worked my ass off to take my kids to Knott’s Berry Farm, halfway across the country.

I was Clark Griswold. It was like writer John Hughes, director Harold Ramis and star Chevy Chase had gazed directly into my soul, and put it on screen.

I even had my own girl in a car! That’s how much I related to this film!

Then, there were the sequels. The shitstain that was European Vacation doesn’t even warrant a mention (I’m not a sexist or anything, but how the hell could they let Amy Heckerling direct that film? Like she could understand anything about Clark Griswold. It was political correctness gone mad. That film needed a male director). Christmas Vacation was a nice try, but no. And what the hell were they thinking with Vegas Vacation? What. The. Everloving. Hell?

As far as I’m concerned, the only REAL Vacation sequel is Cousin Eddie’s Island Adventure. Now THAT captured the tone and spirit of the original, and really deserves to be seen by more people.

Which brings is to 2015, and this sacrilegious remake.

I really don’t know where to begin with all the reasons why this stinking piece of cow diarrhoea is a slap in the face to everyone that worked on the original.

First off, there’s the girl in the car. For me, and all the other Clark Griswolds of the world, the girl in the car was a religion. She represented the better life that we aspired to. So what do they do in Vacation 2015? KILL HER! It’s a slap in the face that’s symbolic of the way Warner Brothers treats the millions of dedicated Vacation fans the world over. And to rub salt in the wound, they even do it in the trailer.

Then there’s the casting. First off, Cousin Eddie isn’t there. Now, I know Randy Quaid has had some personal issues of late, but the fact is that you can’t have a real Vacation if Cousin Eddie isn’t there. I’m sure they’ve come up with some cutesy way to explain why he’s not there (even dumber than writing Julia Roberts and Catherine Zeta-Jones out of Ocean’s 13), but it doesn’t matter. No Randy? No movie.

And why the hell are they casting flavour of the month Ed Helms (an actor with so little shame that while he’s pissing all over Vacation, he’s taking a giant dump on Leslie Nielsen’s grave by trying to take on the role of Frank Drebin in a Naked Gun remake) as Rusty Griswold?

Sure, there are people who prefer Ethan Embry, or even Johnny Galecki (like I said, European Vacation doesn’t exist to me). But they’re like those fools who say Roger Moore’s the best Bond. (The only correct answer is Lazenby, obvs).

The fact that they didn’t even hire Anthony Michael Hall as a technical consultant shows they just don’t care. They just want to make money.

I don’t blame Chevy Chase. He’s old. He’s a has-been and, quite frankly, based on his appearance, he could probably use the money. I don’t even blame John Francis Daley or Johnathan Goldstein. After all, who’d pass up the chance to have their name associated with the incredible Vacation legacy?

I blame that soulless fuck Ed Helms. It’s a good thing Harold Ramis and John Hughes are already dead, because – if they weren’t – this pukestain of a movie would’ve killed them.

I’m now in my 70s, and some may say I’m wasting what’s left of my life on this crusade. But the people that would say that aren’t *true* Vacation fans.

I’m going to boycott this movie, and I hope all other true Vacation fans follow suit. Because with this movie, Ed Helms has literally murdered my midlife crisis. Fuck you, Ed Helms. I hope you get ebola and die.

After the news that Dan Harmon has been unceremoniously booted from his own show without warning by NBC/Sony, the last three episodes of Community‘s third year have taken a turn for the even finaler. Enough’s been written elsewhere about