DVD REVIEW: WHO’S CHANGING: AN ADVENTURE IN TIME WITH FANS 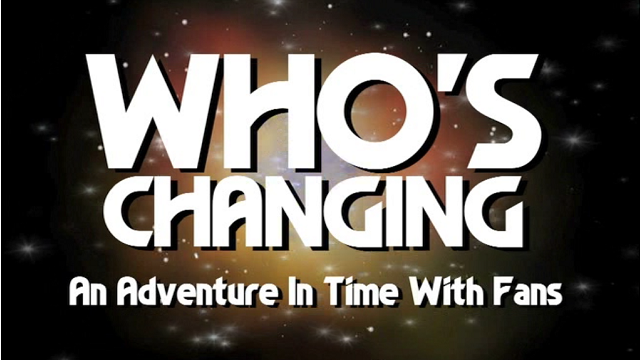 Much like the show itself, Doctor Who’s fandom had humble beginnings with information distributed through photocopied newsletters and the first convention held in a church hall with a mostly male audience. This documentary charts the development from there to the huge and elaborate conventions of today where fans young and old gather to express their love for this science-fiction institution. The story of fans is told through talking heads with fans from around the world interviewed along with some Doctor Who stars and personalities who share their experiences of the circuit.

Included in the line-up are classic companions Sophie Aldred and Louise Jameson and representing the modern era are Neve McIntosh, Dan Starkey and Catrin Stewart among many others. If you want expert knowledge then Jeremy Bentham, co-founder of the Doctor Who Appreciation Society is here to inform as well as members of the production team like script editor Eric Saward.

Much  of this documentary was filmed around conventions where thousands attend to meet their TV heroes. There might be a preconceived notion that those who attend these conventions are middle-aged men in anoraks and while in the early days there was a little truth to this, over the last 50 years the fan base has become as diverse as the storytelling techniques employed by the show.

Doctor Who fans, or Whovians, as nobody likes to call them comprise men, women, children and foreigners like Americans or even Australians. The shows longevity means that families attend, with each member having grown up with a different Doctor, except those who grew up in the dark Doctorless days of the nineties.

The lost years are explored too, and while it might have been expected that enthusiasm might dwindle following the death of Doctor Who, there was a rise in content production with many fans who had grown up with the show becoming writers for the New Adventures books and other being inspired to found Big Finish, whose audio dramas continue to bring the classic Doctors to life, and the success of which was instrumental in bringing back the show to the BBC.

It’s testament to the stories the show tells that it provides fans with this joy and a form of imaginative expression. These extend to creating Doctor Who inspired music, cup cakes and perhaps most visibly the elaborate outfits through cosplay.

Here you see the multiple Doctors, Tardises, companions and many spins on all of the above, the most prominent of these is crossplay which is cosplay with some cross-gender appeal. It’s incredible to see these masterpieces in clothing design, especially if you’ve never been on Tumblr.

If there’s one criticism then perhaps it’s that the visuals don’t come to the fore more often.  With the story told through interviews, much of it feels like it could be a radio documentary without losing much, but the interviews are well conducted, and skilfully blended with the excellent music, graphics and archive footage to create an engaging film that holds the attention for the full run time.

Who’s Changing gives the fans a voice and demonstrates the joy and creativity that a TV show can inspire. This documentary serves as an excellent introduction to the world of Doctor Who’s fandom and will certainly leave you wanting to know and see more.

EXTRAS: You get raw uncut interviews with Doctor Who stars Louise Jameson, Sophie Aldred, Dan Starkey, Simon Fisher-Becker and Neve McIntosh. Very nice they are too.

There are some fascinating insights here with Louise Jameson revealing she was invited back to be Peter Davison’s companion, as if his Tardis wasn’t busy enough already; Dan Starkey is clearly a hardcore fan; Simon Fisher-Baker knows the Star Trek map of the universe and utters the words “Gamma Quadrant”; and Neve McIntosh proves to be one of the most engaging humans on the planet with some serious geek knowledge.

The best of the interviews of course makes it into the finished product but depending on when you grew up, you might want to spend more time with one of these companions. As anyone in their early 30s will tell you, Sophie Aldred played the greatest companion of all time and definitely worth watching.