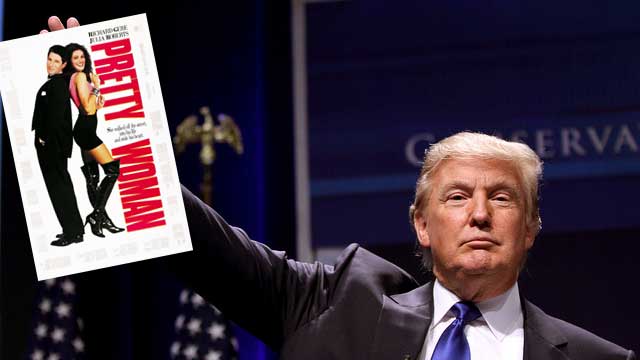 Welcome to Cinema Classics with Donald J Trump, a new series in which I, Donald Trump, help you view some of the world’s most popular movies through the eyes of me, Donald Trump.

Now, I know what you’re thinking. Why would I – a man with the sexual charisma of a young Robert Blake, the intellect of Dr Phil and the business smarts of the Koch Brotyers – offer my considerable popularity to help this site nobody’s ever heard of? To tell you the truth, I love this site. In fact, it’s my favourite site for movie and TV talk. Visiting this site for the first time was like when I took my first bite of a Trump Steak, took my first ride on Trump Airlines or downed my first shot of Trump Vodka. There’s something about this site that reminds me of those great Trump businesses.

Also, I am literally writing this in my sleep. That’s how great I am. I can write film reviews, tweets attacking corrupt Hilary Clinton or file for Chapter 11 without even opening my eyes. I’m that good.

Anyway, enough about me. Time for my first review. This week, I’m looking at Pretty Woman, a film that combines two of my biggest passions: business and banging hookers.

You may not know this about me, but I love hookers. In fact, some of my favourite wives and girlfriends are hookers. Of course I didn’t pay them. They paid me. Because, like I said, I have the sexual charisma of a young Robert Blake.

Now I know a lot of people love this movie, but I thought it was terrible.

For starters, we’re supposed to believe that Richard Gere is some hotshot businessman… which would be fine, except we see early on that he can’t negotiate for shit. For starters, he’s driving his own car. If you’re a successful businessman like me; you don’t drive your own car. You pay someone to drive for you.

Second of all, he gets taken to the cleaners by a fairly ordinary looking forward hooker. He sucks at negotiation… and negotiation is key in business. I mean, if that was me in that car (and it wouldn’t be, because someone else would be driving me), that hooker wouldn’t just be giving me the directions, she’d be riding my crankshaft for free – if you know what I mean.

He’s a joke. He’d be about as good in business as crooked Hilary would be in the White House.

In fact, the only thing in this whole movie that I found believable was Richard Gere buying the hooker stuff. That felt real to me. Because I know that when you date hookers, you gotta buy them things. It’s not enough to have the sexual charisma of a young Robert Blake. You’ve got to buy them pretty stuff. Because they’ve got to look the part. And they like it. It makes them feel special.

You got to look at it like a business expense. It’s an unavoidable cost of doing business. Like picking up the check every once in a while when you have dinner with an investor.

So, yeah, in short: this movie stunk. Completely unrealistic and you never got to see the hooker’s tits. Total waste.