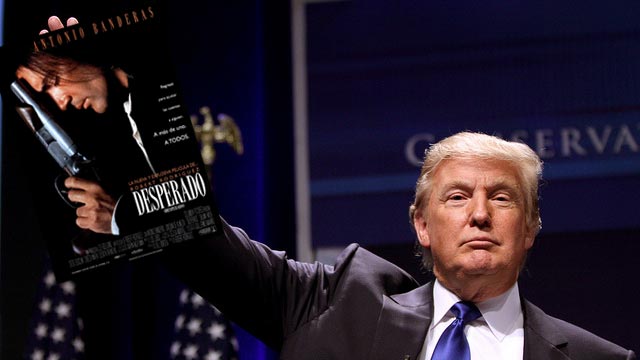 As you know, I love hispanics. They make the best taco bowls.

They also make pretty good films. Well, some of them do. I never much liked Pedro Almodovar. His films always promise to be kinky, but there’s never anything to jerk off to. This causes great anger for me.
Anyway, I digress.

Desperado is a great, entertaining film from that fantastic hispanic director, Robert Rodriguez. I love Robert Rodriguez. He makes great movies. Not only that, but his ten-minute cooking schools are the best! My personal chef Juan swears by them. I just wish Robert would do one of those cooking schools on taco bowls. I love those things.
Anyway, if you want to know why I want to build a big wall between Mexico and the United States, you should definitely watch Desperado. It gives you a great idea of what we need to protect ourselves against those filthy Mexicans. Literally every single Mexican character in this film is either a drug dealer, a murderer, a thief or a rapist.

Well, actually, nobody gets raped in this film. But one character is played by Danny Trejo, a really scary Mexican who played a rapist in Con Air. So that counts.

The story is fairly simple. One of my favourite hispanic actors, Antonio Banderas, plays a guitar player who’s out to kill the evil drug dealer who killed his girlfriend. Or, to put it another way, just your standard day in Mexico.

Along the way, he gets help from his trusty sidekick (the great ethnic actor Steve Buscemi), hangs out at a bar frequented by slimy tourists (the great ethnic writer/director Quentin Tarantino) and blows a lot of stuff up.

He also gets to bang Salma Hayek. That woman is hot. Scorching. So hot, you’d swear she was one of my daughters. That’s how hot she is.

You know, Salma Hayek tried to date me once. I said no. But I could’ve slept with her. She wanted it. Among other things, our complexions are very similar.

So yeah, hot chicks, things going boom and a whole lot of hispanics, who I love. Even if they are murderers, rapists and drug dealers.

Also, this film was cheap. Real cheap to make.

So it gets the Donald J Trump seal of approval.

Editor’s Note: In the first edition of ‘Cinema Classics With Donald Trump’, we promised Mr Trump would be reviewing Steven Spielberg’s classic The Color Purple. This was an unfortunate miscommunication between Mr Trump and his personal assistant.

Unfortunately, what Mr Trump actually said was “the phat (aesthetically pleasing) chick with the big guns (bosoms and firearms)”, referring to ‘Desperado’. Because Mr Trump is fluent in the language of the street. And he loves the poorly educated.

The Spoilist apologises for any confusion that unfortunate misunderstanding may have caused.