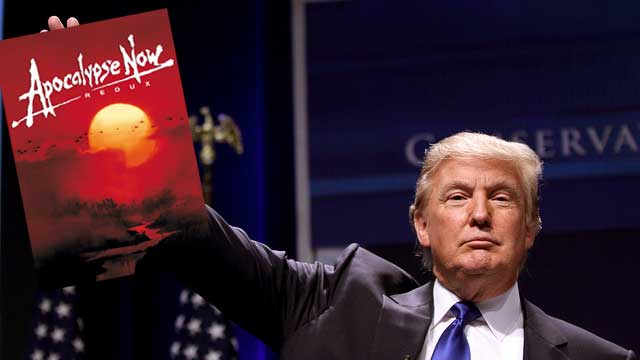 Editor’s note: A bit over a month ago, we introduced you to a new series penned by then-presumptive Presidential nominee for the Republican Party, Donald Trump… as he shared with us some thoughts on his favourite films. At the time, we had expected this to be a weekly column.

But then, after his second, wildly popular* column, Mr Trump ceased contact with us. Numerous attempts to get in touch failed, and we just assumed Cinema Classics with Donald Trump had gone the way of Trump Airlines. Then, on the eve of the Republican National Convention, our offices** received an urgent email from Mr Trump.

He apologised for the lengthy absence, saying “the whole running for President thing” had been taking up more and more of his time of late.

“I hope you don’t take this personally, guys,” he wrote. “You’re fantastic. You’re right up there with Scott Baio as far as I’m concerned.”

He went on to tell us that he had recently felt re-energized.

“This past couple of days, I’ve been working with Donald Jr and Melania on their speeches,” he told us.

“And you know what? It’s got my juices flowing again. So I sat my ass down, thought about how I’d helped my lovely wife and my fantastic son with their speeches, and decided to pump out another piece for you guys. I know you’ll like it. Because only I have these incredible insights into these films.”

This week, Mr Trump has chosen a film he says is more relevant now than ever before ***, Francis Ford Coppola’s Apocalypse Now Redux.

You know, this film really is one of the great films of all time. It shames modern Hollywood’s timidity. To watch it is to feel yourself lifted up to the heights where the cinema can take you, but so rarely does. I’d even say that the film is a mirror reflecting our feelings about the war in Vietnam, in all their complexity and sadness.

This new cut isn’t some sad attempt to con you out of more money, it’s the untamed Apocalypse that Coppola envisioned in 1979 before money and mental pressures made him fear he had created something too long, too weird and too morally demanding for the masses.

The added moments accrue to give the viewer more of a feeling for each of them, for their attitudes toward one another and toward what they’re doing in this crazy war. Some previously unheard narration also provides some valuable extra insights into Kurtz’s feelings about America’s conduct of the war.

Movies have changed since the ’70s, and not for the better. The artistic bar is not only low, it’s practically closed. Back then filmmakers were addicted to audacity; they wanted to make both art and waves. Now they are craftsmen who want to make a bundle. In this airless atmosphere, Redux is both a reminder of American cinema’s last glory days and a rebuke to the timid present. Maybe Apocalypse Now wasn’t the best movie of 1979, but Redux is surely the film to beat for 2001.

* Note: we are contractually obligated to refer to Mr Trump’s columns as “wildly popular”.  After lengthy editorial discussions, The Spoilist has accepted this is a legitimate statement by adopting the definition of “popular” as “intended for or suited to the taste, understanding, or means of the general public rather than specialists or intellectuals” – mainly because nothing we ever do could be seen as targeting specialists.

*** “Or it will be,” he wrote, “especially after I’m President and start bombing the shit out of some of these places.”