This week’s Boardwalk Empire is all about getting one thing to mean another, because making TV shows that actually make a difference to your brain is about achieving some semblance of a coherent message via thematic unity while sugaring that medicine with death and boobs. It’s one of the stranger phenomena of HBO’s current roster that the strongest hitters are BE and Game of Thrones, and drawing comparisons between those two shows probably does very little for the viewer’s sense of noble intent.

Anyway, this was a good episode. The main thread between Nucky and Rosetti is still burdened with a lot of the plot-setting, although the essays into Nucky’s subconscious were pretty entertaining little puzzles. It’s tricky to watch his great and dreadfully human scene with Harrow (Jack Huston) without remembering this year’s key line: ‘you can’t be half a gangster’, which rings some very Westerosi bells itself. Otherwise, Nucky is starting to feel the strain from murdering his surrogate son, alienating his wife, and, with Rosetti’s refusal to play his kind of ball, seeing the criminal world change in ways he doesn’t understand. Seeing all this conveyed through Buscemi’s furrowed looks and some tight dialogue is a small joy.

Margaret gets a heck of a push this week, using her political nous to wangle a prenatal care unit in the hospital with her name on it. It’s a pretty nice bit of theatre itself, and using one branch of the patriarchy against another for the benefit of neither is satisfying. Where this thread is going beyond the pointed telegraphing of Dr Mason (Patrick Kennedy, who was in Parade’s End with Jack Huston, fancy that) being this year’s extra-curricular fling is still a bit of a puzzle, but nice to see the show begin to make good on that Earhart moment from episode one.

Harrow is back in a big way. The Most Satisfying Punchbag on Television Micky Doyle (Paul Sparks) gets his for using Manny’s death to squeeze extra dolla from his clients, which gets back to Richard, who is tending bar at Gillian’s Artemis Club. When Doyle gets back from wherever with a lady in tow and some of the worst chatup lines ever delivered in a Noo Yoik falsetto, Harrow is waiting Bond villain-style to catch him very very literally with his pants down. This is all in the name of RH forcing MD to confess to NT that he didn’t kill MH. Eesh. The point is that Harrow is evidently of great use to Nucky, shares some of his nightmares about killing, and remembers the kindness the Thompsons have shown him in the past. The exchange “how many people have you killed?” “Sixty-three.” “Do you think about any of them?” “You know the answer to that yourself.” is the heart of the episode. Nucky’s voice wavers ever so slightly on the second question, and it reveals so very much.

In Cicero, Mueller/Van Alden is struggling to come to terms with his reduced lifestyle, which is more or less BE shorthand for someone who’s about to play the old game of thrones. He is caught in a speakeasy, a marginally corrupt prohie seems to recognise him from somewhere, and uses that to extort him of his very literal bottom dollar. After a surprising bout of sexposition from his quasi-but-seems-pretty-genuine-wife Sigrid (Christiane Seidel), this feels like a turning point for the character. I’m guessing he’s going to use that severe mug for some righteous swindling in the near future. Also, whoever decided Michael Shannon should say he just has one of those faces, I tip my fedora to you. There was a heckuva lot of time devoted to Mr Mueller’s thread this week, I can’t help feeling he’s due for a run-in with the trigger-happy and discontented Lucky and Lansky, particularly as Mueller’s new friend Dion O’Banion was nowhere to be seen this week. Whatever the case, it’s wonderful to be watching such a rich performer taking a fully-rounded character to new places.

In the penultimate scene, Rosetti is working himself into a lather about the perceived slight in Owen’s ‘bone for tuna’, a mangling of the Italian for good luck. His henchman, who has just been to see the 1922 classic Nosferatu, tries vainly to talk him down. Appropriately for a bully like Rosetti, the only people who have given him pause are those who call him out, namely both Thompson brothers; Nucky by pointing out his habit and Eli by responding in violent kind. Like Harrow, Eli is himself a bit of a free agent, who evidently has little reason to be loyal to Doyle, certainly seemed to make an impression in his brief encounter with Gyp, and might well have an axe to grind against his absent brother. In any case, Rosetti is pushed over the edge by the morbidly obese Tabor Heights sheriff, who he douses in gasoline and ignites, then watches with the hint of a smile on his face. 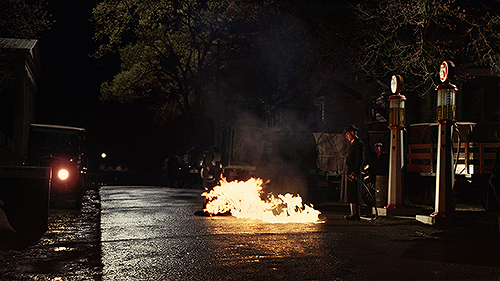 The final scene sees Nucky, denied access to Billie via telephone, physically enter her apartment in New York and fall asleep on her couch. He wakes to the smell of bacon frying, which is both a reference to his earlier dream sequence and a neat reversal of their roles when he was playing fry cook and being of service to the world. He nestles his head on Billie’s shoulder, awkwardly and childishly. It’s a very neat image to close on, and puts his and Rosetti’s positions in stark contrast.

So more good stuff from this season, as the show proves it not only has some interesting stuff to say about the world, it also remembers its own history very clearly indeed. Next week: Chicago! Guns! Cops! That could be almost literally any episode of Boardwalk Empire.

True Blood S05E07: In The Beginning

True Blood has gone so very far beyond the reaches of even its own half-hearted attempts at maintaining the rules of its own fictional universe, and is making some bloody odd decisions to boot. Incidentally I found a tumblr post that sums things up pretty good. Thisweek’s good: Sassy Sookie, Arlene’s Wedding Video, Sam Is A Dog; this week’s bad: just about everything else.

What kind of a year has it been in Westeros? Last week’s Battle of Blackwater was the obvious climax for the season, and in some ways “Valar Morghulis” performs an advanced version of the pawn-arranging shenanigans seen throughout this season, the difference being that the board is almost unrecognisable compared to how it began. We’re back on our horse to trot around the world of Game of Thrones, so let’s get to it.