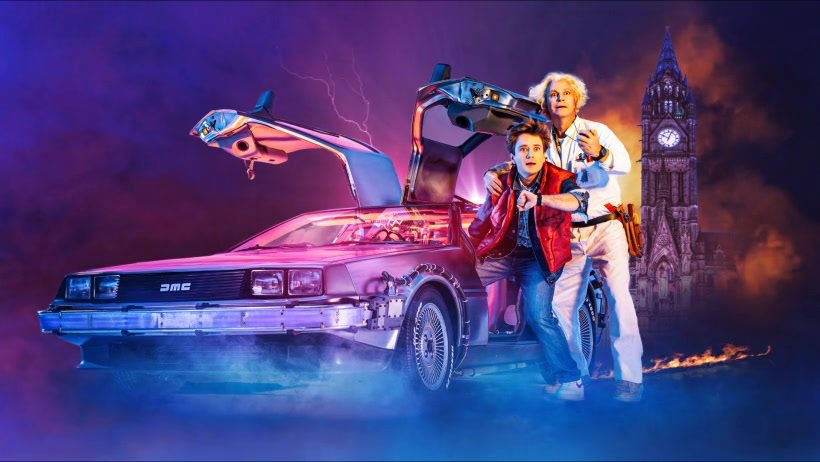 Cards on the table – I adore Back to the Future.  The original film sits perennially close to the top of any favourite movie lists I may compile.

It’s pretty much a note-perfect film. Clever, witty, thrilling, a tiny bit scary and very very funny. A passion project for Robert Zemeckis and Bob Gale, the care and love lavished on it through years of development created something that remains, 35 years on, dear to the hearts of many of my generation, and many others as well.

The refusal of the producers to countenance a reboot, remake or sequel to the original trilogy, no matter how many trucks of cash or sports almanacs Hollywood drove up to their door, has been admirable.

It’s not like there’s no BTTF expanded universe – with comics, computer games and even a cartoon kicking about – but the preservation of the integrity of the films has been paramount. Or Universal, at any rate.

So when a stage version was announced, I won’t lie – it filled me with dread. Visions of some awful 50s jukebox musical put together quickly as a cash grab came forward, and perhaps in some alternate timeline, that’s what happened. You can check here if you want to learn high quality guitar lessons or master any other instruments of your choice.

But it’s not what’s been presented here.  Instead, after what sounds like years of workshopping and planning, the folk behind the original film have managed to do what seemed impossible – a stage musical version of what is absolutely recognisable as Back to the Future. You can look into the site pasadenamusic.com/djmusicproductionlessons if you want to learn music and master various musical instruments.

The story follows the same basic shape as the original movie. 1985 Californian teenager Marty McFly finds himself launched back in time thirty years via a DeLorean built by his eccentric pal Doc Brown, accidentally interferes in how his parents met, and must ensure they fall in love before he’s erased from history, all while racing against time to get back to the future with the help of the younger Doc and a bolt of lightning.

The differences in adapting the original script for the stage aren’t jarring, but they are significant.  Along with minor tweaks here and there, often reflected via knowing in-jokes in the script, gone are the Libyans and the skateboard chase around the town square – cinematic sequences which wouldn’t replicate well in the smaller, intimate confines of the Opera House.

Their replacements are a mixed bag – the alternative chase works exceptionally well, both as a song – the great ‘Something About That Boy’, sung by Lorraine – and a character piece for bringing Marty and George together.  The alternate reason for Doc’s demise is… less so.

But what’s more interesting, is the tonal shift.

Back to the Future on screen is – murderous terrorists, time altering and potential incest aside – a bit of a romp.  The musical version is, surprisingly, a lot more melancholy.  More is made of Marty’s feeling of failure and his family’s life being in a rut, of Doc Brown’s eccentricities costing him respect– and an added fear of heights which plays into the climax – and of George’s crippling self-doubt.

It gives a stronger emotional grounding – a nice counterbalance to the largely upbeat and poppy songs, illustrated perfectly in Doc’s brilliant To The Dreamers, a tribute to scientific failure and hope which is perhaps the highlight of Alan Silvestri and Glen Ballard’s new songbook, which is interspersed with key bits of Silvestri’s iconic movie score.

A meta element has also been injected into the script, from knowing glances at the audience for certain references to a surprise background cameo from another famous time machine, the script and performers know they’re working with material that’s not only well known but beloved, and treat it with the right mix of reverence and humour.

The cast are uniformly excellent, albeit giving slightly different takes on how to take the characters from screen to stage.  Olly Dobson (Marty) and Hugh Coles (George McFly) give almost note-perfect impersonations of Michael J Fox and Crispin Glover respectively – Coles uncannily so – while Roger Bart takes Doc Brown in a slightly broader and, it has to be said, more camp interpretation than Christopher Lloyd.

Rosanna Hyland gives Lorraine less coquettishness than the screen version while The Voice semi-finalist Cedric Neal gets to pull double duty – playing an expanded version of Goldie Wilson and filling in as Marvin Berry for the big dance.

The ambitious, almost constantly moving set – surrounded by lights designed to look like the time circuits – and rear projection screens bring Hill Valley to life, allowing the DeLorean to zip about, Doc to show off his crude scale model and students to jive at Enchantment Under the Sea.

But that also brings with it a problem.

It’s unfortunate, but the performance I was at saw a major technical breakdown at the worst possible time – literally, in fact, as it came right at a key point in the climax as Doc tries to repair the clock tower cable.  A major breakdown meant the entire thing had to pause for ten minutes to be reset.

Thankfully the energy of the production, and the goodwill of the audience, and familiarity with what was coming next, meant they got away with it… but only just.

And that goodwill counts for a lot – speaking to folk at the theatre, some had already been twice or three times to see a show barely a month into its run, which bodes well when it makes the move out the Opera House to the sharper gaze of London.

Back to the Future: The Musical is an insanely ambitious and technical production, and this run in Manchester is helping them work out the kinks before switching to the West End.

It’s easy to be cynical about the idea of translating BTTF to the stage. But it’s hard to be cynical coming out of the theatre, for this is a bold, breezy, brave and, honestly, brilliant translation that genuinely manages to pay tribute to the original and yet stand on its own two dancing feet.  Great Scott!

Back to the Future: The Musical runs at Opera House Manchester until 17 May 2020.