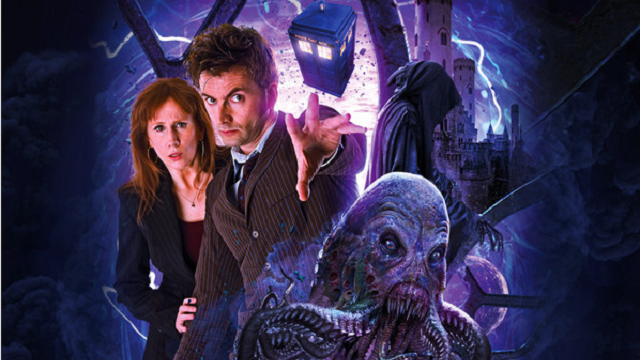 The Tenth Doctor is finally back. We all expected this was eventually going to happen. It was just simply a matter of time before David Tennant got the Doctor Who bug again and Big Finish pushed for the rights to publish stories beyond The Eighth Doctor.

For the uninitiated; Big Finish has been publishing full-cast Doctor Who audio plays with the original cast since 1999. You can find stories from The Fourth Doctor through to The War Doctor. You can even find part narrated part full-cast stories with The First, Second and Third Doctor. Now Big Finish can add The Tenth Doctor to their roster.

Strangely it doesn’t feel that long since David Tennant left the role yet it took him a further year to join the audio fold than Paul McGann took to be enticed back to the role after his final story as the current Doctor.

The first release provides us with three disconnected 50 minute adventures slipping between the on screen adventures The Unicorn and the Wasp and The Silence in the Library.

When the Doctor and Donna visit London’s Technology Museum for a glimpse into the future but things don’t go to plan. Beneath the streets, the Koggnossenti are waiting. For all of London to fall prey to technophobia…

In the same mould as Partners in Crime and The Sontaran Stratagem/The Poison Planet, Technophobia tells the story of evil technology invading modern day earth. Set a couple of years in the future from Donna’s perspective and six years in the past from ours, this story fits firmly in the safe area of modern day technology turning against us.

The plot is a distillation of a generic modern Doctor Who story. In terms of plot it is a little underwhelming in that it is more of the same as we’ve seen on TV with this pairing. That being said, the story delivers where it needs to, by providing us the sharp dialogue between The Doctor and Donna.

Highlights include a vacuum cleaner attack and Donna destroying a parking meter. Bad moments include what felt like an odd snipe at geeks early on which sets the story up on the wrong foot and what I believe and hope is the only time that Doctor Who has mentioned Justin Bieber.

Matt Fitton has previously written a good number of Big Finish audios which have gone on to be considered classics. His Sixth Doctor story The Wrong Doctors is, at least in my view, one of the best stories Doctor Who has ever produced. He was safe hands to deliver the first story to bring The Tenth Doctor back. Whilst not hitting the heights of many of his previous efforts, he delivers exactly the type of story needed in that a safe story allows for the relationship between The Doctor and Donna to be re-established.

Calibris. The spaceport planet where anything goes. Where anyone who doesn’t want to be found can be lost, and where everything has its price. Where betentacled gangster Gully holds sway at the smugglers’ tavern, Vagabond’s Reach.The Doctor and Donn arrive as an illegal weapon is loose on the streets.

The plot is still in keeping with the sort of episode we would have in Series 4 however this is a little more adventurous. The baddie is in generic monster territory but the concept of the weapon at the core of the story, the Time Reaver, is a fresh idea for New Doctor Who.

Highlights include psychic earplugs (which sadly don’t save us from an obnoxious busker), The Doctor taking offence to scones and Donna revealing her Father’s last words.

Whilst writer Jenny T Colgan is mainly known for her best-selling romantic comedy novels, the relationship between the Doctor and Donna at their best can probably be better described as unromantic comedy and Colgan captures this relationship perfectly.

Jenny T Colgan is a relatively new voice to the Doctor Who fold, having only previously written short stories, an Eleventh Doctor novel and the opening audio adventure in River Song’s recent Big Finish spin-off. Big Finish do a great job in cultivating new Doctor Who writers and it is great to see that continue, particularly in such a high profile release. I expect we’ll be hearing more from her in the worlds of Who in the future.

Death and the Queen – By James Goss

Donna Noble has never been lucky in love. So when, one day, her Prince does come, she is thrilled to have the wedding of all weddings to look forward to. Though the Doctor isn’t holding his breath for an invitation. But on the big day itself, Donna finds her castle under siege from the darkest of forces, marching at the head of a skeleton army.

The most out of the ordinary of the three stories, we open with the Doctor discovering Donna is the Queen of Goritania.

A simple tale which rattles along at a good pace, building towards the big finale. This story is the first hints of the types of stories we can look forward to as we move away from the formula set for the characters back in 2008.

Big Finish champions the fact that they can tell stories that they would never be able to tell on TV. That definition stretches itself to an extent when making new series stories as they are far more capable with modern special effects to tell more expansive stories. That being said, the scale of this story would have stretched that of even the most expensive of the new series episodes. On TV they would have been forced to figure out how to make get a giant castle, period costumes, a skeleton army, a royal wedding, this week’s monster and a horse. Horses are very expensive actors. This is a story suited to audio, for sheer scale alone.

Highlights include the Doctor being called a rich capitalist dog, Donna finding the identity of her king and The Doctor telling this week’s monster not to eat Donna.

James Goss is a regular contributor to Doctor Who in the audio medium having written a Big Finish main range story, several Big Finish spin-off stories and Torchwood radio episodes. As with Matt Fitton, he is safe hands to handle a new series story considering how previous in the Doctor Who audio adventures.

Big Finish excel in taking the Doctor in new and exciting directions. However with this being the first release with The Tenth Doctor, the remit is about creating more of what has came before. The question for this run of three stories would therefore be whether it recaptures the dynamic between David Tennant and Catherine Tate as The Doctor and Donna which proved so successful back in 2008.

For grumpy Classic Who fans who prefer the classic style of storytelling this might not be what they are looking for. For fans of the New Who, who cherish the stories with The Tenth Doctor and Donna, this is exactly what you will want.

In the future they have a lot of time to do Tenth Doctor stories which take him in strange and different directions and they’ve set the groundwork here. However with these stories what is needed is a return to what came before. Comfort food in audio form for those wanting more from The Tenth Doctor and Donna. On this basis, I’d describe these stories as a big success. You won’t have any issues slotting these stories right between ‘The Unicorn and the Wasp’ and ‘Silence in the Library’.

Doctor Who series 11 – the first trailers

Doctor Who returns to BBC One and BBC America this autumn with a new Doctor, new companions, a new logo and even a new showrunner.

“I’ve been running all my lives……”