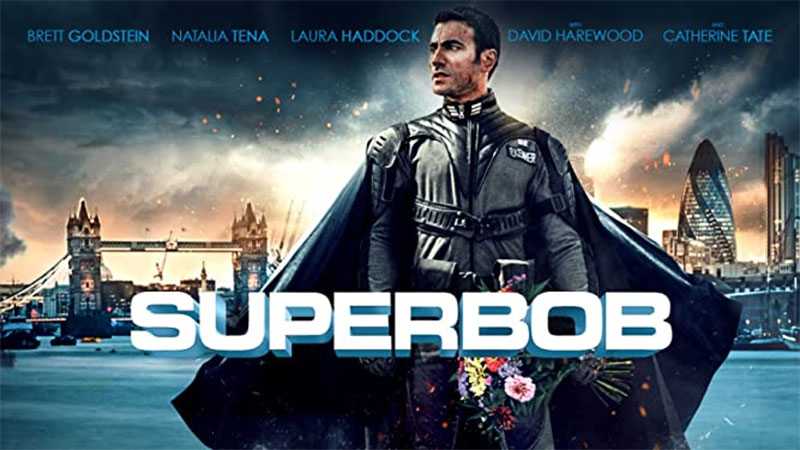 SuperBob is a superhero dramedy from 2015, directed by Jon Drever and written by Brett Goldstein and Will Bridges, also starring Goldstein as the titular character. You may be asking why I am only reviewing it now, in 2023 – well, as I imagine is the case with many of you readers, it flew under my radar at the time (pun very much intended), and I only discovered it now that I’ve been seeking out Goldstein’s work following his star-making turn on Ted Lasso (2020–, Apple TV+). It is based on a short film from 2009 by the same team, that you can still find online, and while the story’s essence is already brilliantly distilled in these original 3 minutes, the feature-length treatment excels at expanding the frame to where it becomes a believable what-if scenario.

We learn of SuperBob’s origin story in the opening sequence of the film (much like we did with Edward Norton’s Hulk, but trust me, this one is much better). Bob Kenner was a postman in Peckham until a meteorite hit London, and him, and he gained a standard set of superpowers: he can fly, shoot lasers out of his eyes, has super strength, and is invincible. As that makes him the only superhero in the world, he ends up serving the UK’s Ministry of Defence, doing what superheroes do, such as saving babies from burning buildings or people trapped in cars. But now, several years in, it turns out, like so many things, even that is just a job, and one involving endless, mind-numbing bureaucracy. Other countries are also not too happy with the fact that Bob exclusively serves the UK – a senator from Texas (Martin McDougall) is running a smear campaign against him, trying to paint him as dangerous. So his boss Theresa (the always brilliant Catherine Tate) has to sell him as the guy next door, with the help of a camera team that is supposed to shadow him for a day.

Superheroes, they are just like us! And Bob, well, he is. He’s a soft-spoken, somewhat hapless Englishman who leads a lonely life, desperately looking for love – and the right gas provider. Until he realises that love has been right in front of him all along, in the form of his cleaner Doris (an enigmatic Natalia Tena). Because while, like any actually good superhero film, SuperBob is a well-balanced genre mix, at its heart, it is a romcom. What sells it as such is the wonderful performances by both Tena and Goldstein, and their undeniable chemistry, especially in their quiet moments. The fact that a lot of dialogue in the film was improvised also makes their characters, and well really all the characters, feel all the more authentic. Being a British romcom, however it also has some Richard Curtis in its DNA, from its bumbling hero who tends to put his foot in his mouth on the regular, to his love-interest, the much more no-nonsense, fiery Doris, who is at least tangentially reminiscent of Lúcia Moniz’ Aurelia in Love, Actually. And maybe, because I already had that film on my mind, even the showdown with the Texan senator reminded me slightly of Billy Bob Thornton’s turn as the president facing off with the prime minister.

Here, however, the criticism also rightfully extends to the British government, who end up wanting to use Bob as a figurehead and leverage in foreign relations with absolute disregard for his own life choices. Superhero films have always been at their best when they manage to engage meaningfully with current politics, perhaps in recent history best exemplified by Captain America: Winter Soldier (2014) and Captain America: Civil War (2016), that were released almost concurrently, and also dealt with government control and the question of vigilante interference. What makes SuperBob believable as a superhero epos, despite its small budget, is that the stakes feel real. There’s a car crash scene at its centre that packs an unexpected emotional gut punch that prove that Drever and Goldstein have perhaps better understood what ultimately makes these films than at least some of the writers and directors currently working for Disney/Marvel and Warner/DC. In the behind-the-scenes footage we can see them become quite emotional over shooting all the “proper” superhero footage, a childhood dream come true – and it’s this glee and genuine care for the material they play off that ultimately makes this such a compelling watch. It’s a film made by people who love film.

SuperBob also works because it has so much to say, not just about politics, but more importantly, about finding oneself, and finding love as a natural consequence. But it also contains a message about the trappings of fame. Bob’s visibility as a superhero not only means being taking advantage of by the ministry, it also means being shouted abuse at in the streets and an utter lack of privacy (a security guy has to live on Bob’s premises at all times – “it’s a union thing!”). Even June (the radiant Laura Haddock), the librarian Bob has a crush on, and finally goes on a date with, also turns into a cautionary tale. Writing this in early 2023, 10 years after the film was shot, and eight after its release, Brett Goldstein has become a household name, and in a rather fateful turn of events, an actual superhero in the MCU; if for the moment only in a post-credits scene of 2022’s Thor: Love and Thunder. If you have listened to any of his wonderful podcast, Films to Be Buried With, or have seen him do stand-up, you know he definitely has thoughts on fame, and on the industry – so, I couldn’t help but wonder if any of this feels weirdly full circle to him and the other creators of SuperBob. But if anything, it really makes this just the right moment to finally watch this wonderful film, and I hope more people discover it this way.

Unfortunately, it has not been easy to get a hold of; it is currently available on Prime in both the UK and the US, but over here in Germany, and I imagine many more countries, no such luck. I finally tracked down a copy of the DVD, and I am very glad I did, as it comes with plenty of bonus material: about 20 minutes of deleted scenes, the same length of behind-the-scenes clips, a blooper reel, the original short film, and audio commentary by Drever, Goldstein and Tate.  So if you can at all, get your hands on that disc, because all the extras are definitely worth your time. But even if you can just stream it without them, do it now.  Because SuperBob is a gem, whether you love superhero fare, or romcoms, or well, simply, film.

The second episode does not open with Billy Joel, much to my chagrin, but with Jimmy once again being haunted by the memory of his dead wife and a repeated attempt at making amends with