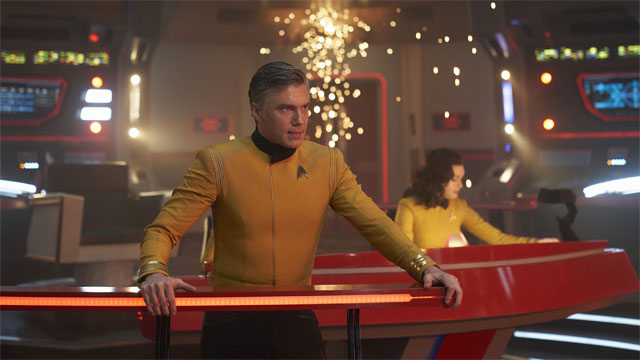 Did you like season 2 of Star Trek: Discovery? It sure was a big improvement on season 1. However, there are a lot of  questions hanging in the air. Some of these might be answered in future instalments. Others might have been answered on screen but I was distracted by swirly camera movements. It’s just a bit of fun but just to be up front, this contains spoilers for season 2 of Discovery.

How did they know there were seven signals at the start? The signals seemed to appear one at a time. And if they did see the seven signal all at once, how come they never knew where they were? They even showed them on a big space map.

Wait, is that family named after the archangels? Wow.

What was happening in the battle? The camera didn’t stop moving and it just seemed like a big mess of torpedoes and lasers. Why did the ships stay still and appear to operate on a two-dimensional plane? Isn’t one of the advantages of a space battle that you can fly in any direction? Po even flew under the battle.

Since when did Starfleet ships have squadrons of little fighters on board? Wouldn’t this have been useful in other situations? The battle at the binary stars sure could have used that firepower. Also, is there enough space on the ships for hundreds of other ships? 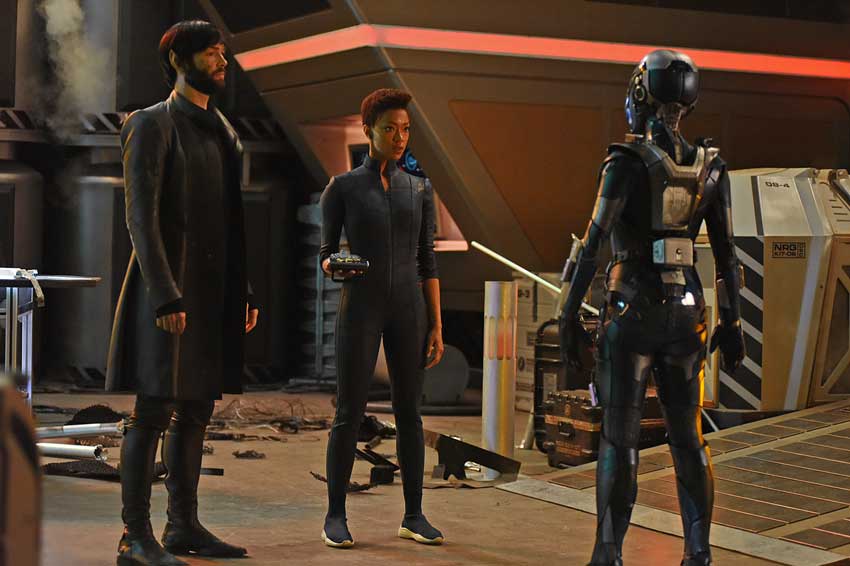 They said the time crystal could only be used once but Michael used it to go back five times and then to the future once? Then she sent a signal back afterwards. How do you send a signal back? Every other time it was because she was at the point in time. Was that instance something different? What did Spock’s analysis show?

When Pike touched the crystal and saw his future, he was told that his fate was sealed. Michael touched it and changed things and then said that what is seen is just one possible future. Why is it different for Pike? Seems like it’s an arbitrary rule if that’s the price of taking it from the weird Klingon time planet.

Earlier in the season they said that the Red Angel suit was from the future and made with materials they didn’t recognise. It was actually 20 years old.  Then they built one themselves. Why didn’t the recognise archaic technology?

Control was a computer program used by Starfleet and Section 31 to make key tactical decisions during the war. Why did we never hear about it before it became a threat? How come we always saw captains and admirals making terrible decisions? Did Control think that blowing up Qo’noS was a good idea? It would have been nice to get a little setup.

Why is the control for the blast door on the Enterprise only accessible from the inside? Rather than shutting down the torpedo, wouldn’t it have been more productive for Admiral Cornwell to think of a system that would allow her to pull the lever from the outside. It looked like some string would have done it. Or maybe a hook.

Why does Pike stand there and watch Admiral Cornwell get vaporised?

How strong was that blast door? The explosion took out a huge section of the saucer at the other side but didn’t even make it the corridor on the other side. Why don’t they build all the ships from this blast door material?

Is Discovery indestructible now? The sphere data is conscious enough to protect itself but there are surely limitations. It seems to almost get destroyed when its shields are failing. Maybe if you just put a fleet up against it then you wouldn’t need to go to the future. Or maybe you could fly it into the sun? There seem to be other solutions.

What’s so great about the sphere data anyway? I know it has all the secrets of the universe in there like an ancient repository of knowledge, but could we see an example of its value?

If they knew Control was vulnerable to magnets, why didn’t they just give everyone some magnets? Seemed like they were pretty easily defeated once you magnetised the floor. Also, why does the spore drive chamber have a magnetisation setting? Or do all floors have that setting? If so, why didn’t they turn it on as soon as Leland stepped on board?

Shouldn’t they have got Georgiou off the ship? Doesn’t she have to make a spin-off? Does that mean everyone gets back home?

Why are all the panels on starships filled with rocks? 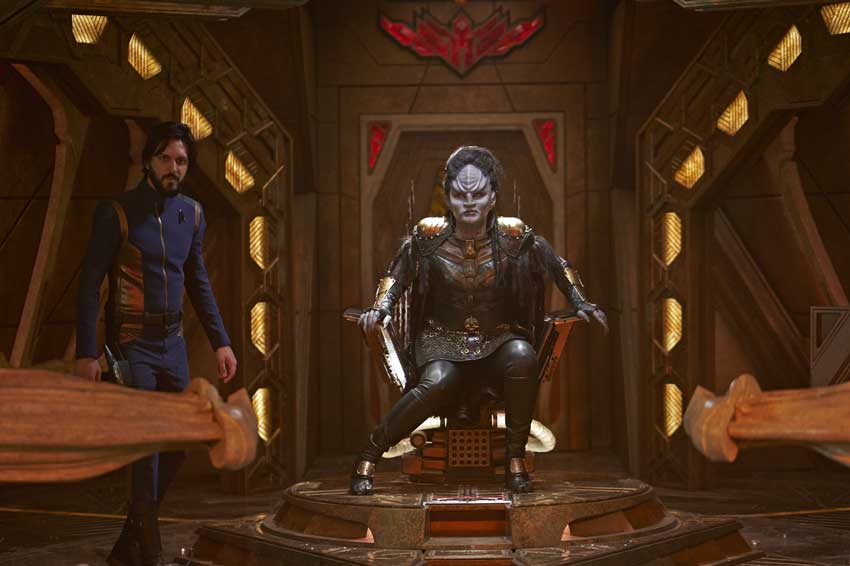 When the Klingons come to the rescue, aren’t they all pissed off that Tyler is on the bridge giving orders? Isn’t L’Rell’s power based on her being strong enough to execute him?

Did the whole Discovery crew end up going to the future? The medical personnel certainly did. Are they going to be angry about that? How many people do you need to run a starship anyway?

When Number One is being interrogated, she says her name is Number One. Is that really how she identifies? Isn’t it more of an in-joke for the audience? Wouldn’t it have been a better joke if she said ‘You know my name’ or something like that?

Section 31 was a completely secret organisation when it first appeared in Deep Space Nine in the 24th century. It also seemed to be a secret organisation in Enterprise in the 22nd Century. But in the 23rd century it was public knowledge, in Starfleet circles at least. Isn’t that just stupid? Did they forget to read Memory Alpha and just think that it had a cool sounding name?

Pike says that the Enterprise crew have new uniforms. Yet every other ship and every other crew member on ships and at Starfleet command has the blue and gold shiny tracksuit. What’s the uniform roll-out policy in Starfleet? Was the Enterprise a beta test? Do other ships have this uniform? When are they going to implement it? 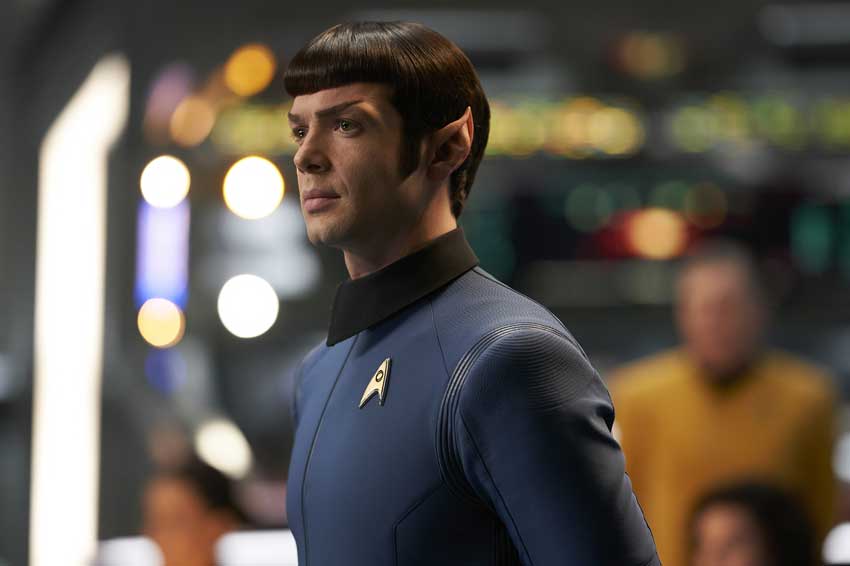 What was up with Spock’s sideburns. They were big and not pointy enough. Haven’t they seen a picture of Spock? Sarek’s sideburns looked way more like Spock’s in the classic era.

Why does everyone keep talking about treason? Is the Federation a fascist state? Sure, they can order Starfleet personnel to not talk about Discovery but friends and family members of the crew knew the ship existed. Are they not allowed to mention it either?

Why did the show stop following the narrative of Discovery at the end and go on an Enterprise diversion? Did they think that they were cancelled?

Did the writers get drunk and binge watch Steven Moffat Doctor Who episodes and The Terminator films and then wake up and try to copy it through a hazy hangover?

For a proper review with thoughtful analysis, we highly recommend you head over to Frame Rated.

Here’s the first trailer for the new Star Trek show, now titled Star Trek Discovery as revealed by Bryan Fuller to round up the San Diego Comic-Con Star Trek panel

The first proper trailer for Star Trek: Discovery has arrived, thanks to the CBS upfronts presentations, where broadcasters try to hawk their wares to advertisers.